On this tour we will explore the Rome of the Seven Kings, the Consuls and Caesars; from Romulus to Julius Caesar to Constantine. Our in-depth look at ancient Rome will bridge the archaeological ruins with the fascinating history of this city at the center of Western civilization. With your guide you will walk through the ancient area of the Roman Forum, the very center of the ancient city. Together you’ll discover the temple of Saturn, the Senate House, The Arches of Titus and Septimus Severus, the Via Sacra (The Sacred Way), and the Temples of Mars and Venus and much more. You’ll hear the stories of intrigue, power, and ambition that shaped these urban spaces to the wills of the great men who had them built.
We’ll also explore the Imperial forums, markets, and monuments where new excavations are changing long held understandings about the layout and uses of these grandiose public spaces. One of the highlights of the tour is a visit to the Colosseum, the ancient site of gladiator fights, mock naval battles, and spectacles involving wild animals from every corner of the ancient empire. This architectural wonder dating to 80 A. D. held 50,000 spectators. It will still take your breath away today. Finally, we’ll walk up on to the Capitoline Hill which in antiquity was the seat of religious activity. From that commanding position you have an excellent view of the Forum and the magnificent piazza, designed by Michelangelo, that is still a center of activity in Rome. 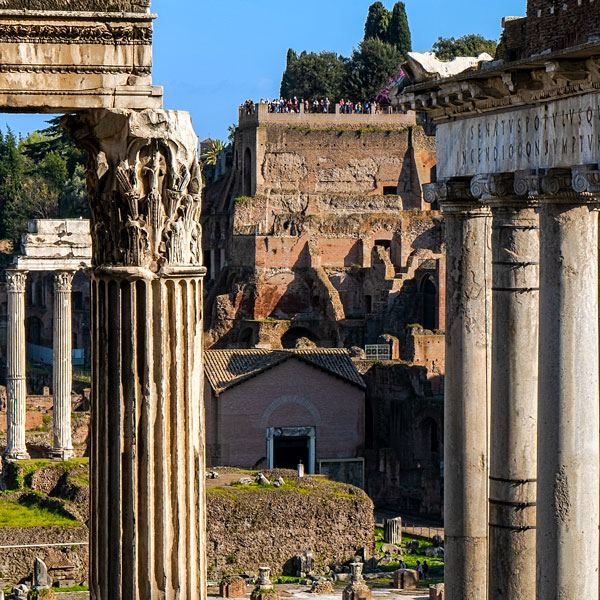 No transportations included. Only if you booked separately.

No dress code requested for this tour. The archaeological area you will visit is located outside in open air.